Looking At Our Heart 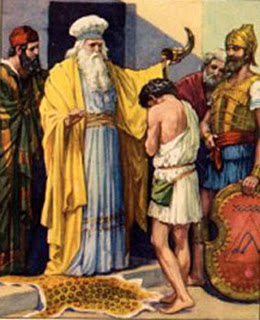 After Joshua died, the nation of Israel was ruled by judges for over 300 years. During this time, the people turned to God when life became difficult, but “did evil in the eyes of the Lord” (Judges 3:7) when the difficult times passed. Finally, they cried out for a king: “We want a king to rule us. Then we will be like the other nations” (1 Samuel 8:20). God gave them exactly what they wanted – He gave them Saul, “An impressive young man without equal among the Israelites” (1 Samuel 9:2).

Saul looked impressive and was loved by the people, but he failed to obey God’s commands. After several years, God rejected Saul as king and sent Samuel to anoint a new king from among the sons of Jesse. When Samuel arrived at Jesse’s home, he saw Eliab and thought for sure he was to be the next king (Eliab was probably tall and strong like Saul).

How often do we fall into the trap of evaluating others based on outward appearance? How often do we draw conclusions about a person based on looks and status. These prejudices affect the relationships we pursue and the counsel we give as well as receive. But God calls us to consider the heart of others and to strongly examine the condition of our own heart!

Much of our life is focused on being externally impressive. We desire the “right” looks, credentials, and possessions. We believe our outward condition makes us more valued, and some people do base their value on these outward coverings. But God looks past the external and directly pierces into who we are on the inside. Our focus must forever be on how we are viewed in the eyes of God, not the eyes of man.

There are very few things with eternal value. And nothing outside the will of God can survive the flames of judgment. The priorities of our life become the treasures which mold our heart; “Where your treasure is, there your heart will be also” (Matthew 6:21). And our heart is NEVER hidden from the eyes of God!

Let’s place our treasure firmly in the palm of His Hand. Let’s begin to consider the riches stored inside our Brothers and Sisters, and consider our true appearance as we stand before our holy Father. Everything external will one day fade away and we will stand bare and empty, with God looking at our heart.

One response to “Looking At Our Heart”