Their Field of Pigs 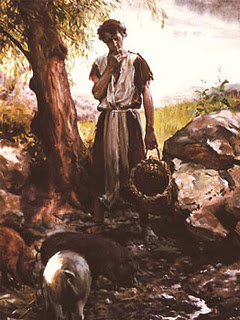 The parable of the prodigal son has had special meaning to our family over the last many years. We’ve witnessed nearly every aspect of this parable work itself out through the life of our daughter, from the pain of her rebellion to the joy of her return. I’ve also seen this as a common issue faced by parents all over the world. No matter what country or culture, parents agonize over the one who has gone astray.

In this parable, we see a rebellious young man demanding what he felt was rightfully his: “Father, give me my share of the estate” (Luke 15:12). This disrespectful attitude grew until the son no longer desired to live under his father’s roof. He “got together all he had, set off for a distant country and there squandered his wealth in wild living” (Luke 15:13).

The reason this is such a universally common issue is that we are all born with the same sinful nature – a nature which holds us in tight control unless we are utterly transformed by the Spirit of God through faith in Jesus; “Those who live according to the sinful nature have their minds set on what that nature desires” (Romans 8:5). At the heart of the sinful nature is a pride which continually demands what we believe we deserve – this is the root of all sin!

The prodigal son continued to live according to his sinful nature until he found himself in a field of pigs; “he longed to fill his stomach with the pods {they} were eating” (Luke 15:16). But God used this terrible situation to soften the heart of the prodigal son and bring him to a state of submitted repentance.

Luke 15:17-18
“When he came to his senses, he said, ‘How many of my father’s hired men have food to spare, and here I am starving to death! I will set out and go back to my father and say to him: Father, I have sinned against heaven and against you.'”

Before the son left home, I’m sure the father tried to provide wise counsel about the true priorities in life. I’m sure the father desperately tried every possible method of guiding the son along the straight and narrow path. I’m also pretty sure the father simply held his son close and wept. Unfortunately, the lessons the son needed to learn could only be taught through pigs.

There is nothing more painful than to watch someone you love walk down a path of obvious pain – nothing rips the heart like watching your child walk away from God and engage in various forms of “wild living.” But it helps to remember that God loves the prodigal more than we can hope or imagine. He desires to live with them in an eternally restored relationship. Our Heavenly Father will never miss an opportunity to teach the prodigal and draw them near – even as they may drift and sink – even as they may wallow in their field of pigs.