Update on My Baby Sister 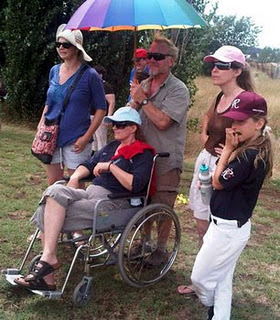 It’s been over a month since I’ve written about my baby sister. Many people continue to write to let me know they are praying and to ask for updates. Thanks so very much for your prayers!

For the sake of the new people on this list, let me give some history.

In the early part of November, my sister was driving home from work and became disoriented. She called her husband and they decided to go to the hospital. On the way to the hospital she had a seizure and tests revealed she has an advanced stage of glioma brain cancer. My sister is living in Australia with three young children and her husband who is a member of the US Army. Naturally this was quite a shock.

When I sent out my original message in November I received over three thousand replies saying how you were praying. This was, and continues to be, such a blessing!

I traveled to Australia after Christmas and had a wonderful visit. My sister has had two brain surgeries to remove some of the cancer, and while I was visiting she began chemo-therapy and radiation treatments. These treatments were difficult and made her weak and quite nauseous. By the time I left Australia on January 8th I was concerned that she may soon be unable to get out of bed. However, God had other plans.

The decision was made to take a break from treatments and this really allowed her to regain some strength. The family was able to take a trip to the beach which they had planned since early last year. She spent several hours sitting on the beach watching her kids play in the water. She has also been able to attend several of the kids baseball games – as in the attached picture.

Radiation treatments resumed this week. This process is difficult as her immune system is very low and she needs to receive regular transfusions. However, I just found out that on Valentine’s Day she called her husband and informed him that he was taking her out to dinner; this is actually very good news!

The cancer continues to grow but the rate of growth has definitely slowed. The family has had to make many difficult adjustments but God has shown Himself to be exceptionally faithful. Within the immediate family, as well as extended family all across the U.S., there is a strong sense that although we never know what the future might hold, we definitely know Who holds the future.

Thank you so much for your prayers. It means more than you may ever know. I will send out another update as the situation changes, but please know that there is peace within the family and a strong sense of being in the Hand of God.