He is Our Joy 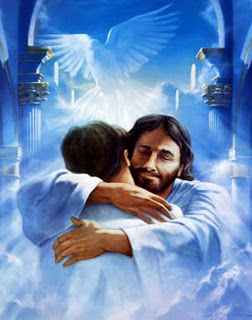 When Jesus came to earth, He took on human form and accepted many human limitations. He knew His purpose long before He was crucified: “He then began to teach them that the Son of Man must suffer many things and be rejected by the elders, chief priests and teachers of the law, and that He must be killed and after three days rise again” (Mark 8:31). But He also knew the pain He must endure…and the pain would be very real!

In the hours before His death, Jesus was beaten, whipped, spit on, laughed at, yelled at and made to wear a crown of thorns. The Creator of the Universe was required to lay bloodied and disfigured as nails were hammered through His hands and feet. His chosen people had turned against Him and demanded His death – and those He loved the most had deserted Him.

Hebrews 12:2
“Let us fix our eyes on Jesus, the author and perfecter of our faith, who for the joy set before Him endured the cross, scorning its shame, and sat down at the right hand of the throne of God.”

Jesus endured more humiliation, disappointment, and pain than we can imagine. But the “joy” that allowed Him to endure the cross was the very reason He came to the world. He came to bring God’s children back into a relationship with their Heavenly Father. The sacrifice of His death allowed a bridge from death to life. His joy was knowing that God’s children would be able to come to Him and truly know Him; that they could talk with Him and worship Him; that they could sit in His presence and be comforted in His loving arms.

We are those children. We are the joy that allowed Him to “endure the cross.” How much love is wrapped up in this deep sustaining joy? Enough love to walk with us through the hottest fires, enough love to carry us when we’re weak, and enough love to NEVER let us go! “Never will I leave you; never will I forsake you” (Hebrews 13:5).

We all face various kinds of trials, but the One who “endured” continues to walk by our side today. He has given us Himself – a true joy which allows us to endure even as He endured. He has given us an eternity to worship in His throne room, an eternity to be comforted and praise His Holy Name! He has given us a love and an unequaled strength which this world cannot begin to understand! We too can face our “cross” with great hope. We WILL endure any and all trials. We will endure because He is our joy.