Give Him All The Glory 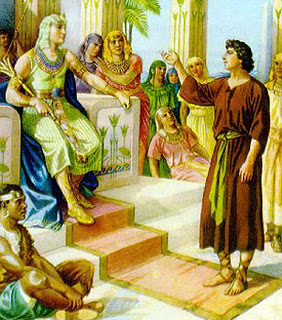 Joseph had some difficult times in his early years. His brothers tried to kill him and then sold him to the Midianites. The Midianites, in turn, sold him as a slave to Potiphar who was one of Pharaoh’s officials. Joseph was then falsely accused by Potiphar’s wife and thrown in prison where he sat for several years – things definitely were not going very well.

Then one day Joseph got his opportunity to make a change. Pharaoh had some dreams which bothered him greatly, but, when he sent for the wise men of Egypt, no one could help; “Pharaoh told them his dreams, but no one could interpret them for him” (Genesis 41:8). Pharaoh was told of a young Hebrew slave who was in prison but had demonstrated a unique ability to interpret dreams.

Pharaoh quickly summoned Joseph from the dungeon; “I have heard it said of you that when you hear a dream you can interpret it” (Genesis 41:15). Wow! This was Joseph’s big chance – his opportunity to take matters into his own hands and shape his circumstances. He certainly deserved a break. And after all, doesn’t God help those who help themselves?

Unfortunately, this is one of the biggest misquotes of the Bible – and a shameful misrepresentation of God. It’s much more accurate to say God will faithfully work our circumstances to the good (as seen through His eyes) as we diligently seek Him and love Him with all our heart, and faithfully follow where He leads.

Joseph could have used this opportunity to bring glory and honor to himself. But He had learned the important lesson that ALL things come from God and should be used to glorify His name.

Genesis 41:16
“‘I cannot do it,’ Joseph replied to Pharaoh, ‘but God will give Pharaoh the answer he desires.'”

Joseph had been given a wonderful gift, but this gift would only produce fruit as God worked through Joseph’s life. This was the same lesson Paul tried to teach the Church in Corinth: “What do you have that you did not receive? And if you did receive it, why do you boast as though you did not?” (1 Corinthians 4:7).