Hiding Among The Baggage 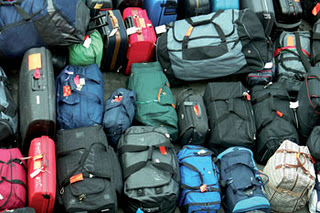 When Samuel became too old to be an effective judge, the leaders of Israel asked for a new kind of ruler; “Appoint a king to lead us, such as all the other nations have” (1 Samuel 8:5). This request was actually an indication of the sad decline of God’s people. By requesting a king, “as all the other nations,” they were rejecting God’s plan and choosing to follow the ways of the world.

God was disappointed with the heart of His children, but He granted their request and told Samuel to anoint Saul as Israel’s first king. Saul was “an impressive young man without equal among the Israelites – a head taller than any of the others” (1 Samuel 9:2). Saul’s external appearance was a perfect match for the superficial values of the nation.

When Samuel spoke with Saul, he was quite surprised to hear he had been chosen by God: “But am I not a Benjamite, from the smallest tribe of Israel, and is not my clan the least of all the clans of the tribe of Benjamin? Why do you say such a thing to me?” (1 Samuel 9:21). Saul’s insecurities were so great that when it came time to officially anoint him as king, he was nowhere to be found.

“So they inquired further of the Lord, ‘Has the man come here yet?’ And the Lord said, ‘Yes, he has hidden himself among the baggage.'”

Although Saul made many mistakes as king, we must not forget he was specifically chosen by God and empowered to do His will. But Saul lived with a great sense of inadequacy and was never able to effectively lead. He continually stepped out of God’s will because his focus remained on his own limitations rather than on the limitless ability of the One who called him to serve.

Each of us who enter into a relationship with Jesus Christ as Lord and Savior are also chosen to do His will – empowered by His Spirit to accomplish everything He desires for our life; “His divine power has given us everything we need” (2 Peter 1:3). Unfortunately, most of us enter this relationship carrying bags from our past which weigh us down and hinder our ability to serve.

What baggage are we still carrying or using to hide from God’s call? There may be sins and failures in our distant (or even very recent) past which make us feel unworthy to serve. We may still carry the pain and mistrust of a broken relationship. We may have even made a sincere attempt to serve but taken a few wrong steps and fallen flat. But NOTHING must keep us from doing His will. Nothing must keep us from following where we know He is leading. Let’s trust Him with all our heart and answer the call today. Let’s keep our eyes on Christ and stop hiding among the baggage.