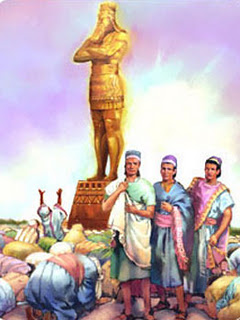 King Nebuchadnezzar of Babylon desired to unite his kingdom by instituting a centralized form of worship. He built a statue of gold about 90 feet tall and 9 feet wide and ordered that everyone must fall down and worship the statue whenever the royal music began to play.

A report was delivered to the King that Shadrach, Meshach, and Abednego were refusing to worship the golden image. The King summoned these three young Jewish men and gave them one more chance to conform to his rules for worship: “If you are ready to fall down and worship the image I made, very good. But if you do not worship it, you will be thrown immediately into a blazing furnace. Then what god will be able to rescue you from my hand?” (Daniel 3:15).

These three followers of Almighty God were faced with an ultimatum; “Compromise your beliefs, or die!” They could have found a way to rationalize this false worship. They could have found a variety of excuses for compromise. But rather than fall to the pressures of their surrounding environment, the three decided to live a life of unwavering faith and unashamed devotion to the One True God.

“If we are thrown into the blazing furnace, the God we serve is able to save us from it, and He will rescue us from your hand, O king. But even if He does not, we want you to know, O king, that we will not serve your gods or worship the image of gold you have set up.”

Very few will ever face a “Compromise or die!” ultimatum. But almost everyone will be tempted to push aside convictions and bow to such “golden images” as financial gain, physical pleasure, personal recognition, or the fear of conflict. We are also constantly tempted to “bow down” with the “entertainment” we watch, listen to, or read. Standing firm requires a determined effort to remain solidly on God’s path.

Hearing God’s direction for our life can sometimes be difficult; but one truth remains – God never asks us to compromise His standard in order to follow His path…NEVER! We can therefore be assured that ANY compromise represents a deviation from His plan.

Let’s strengthen the convictions God has already placed on our heart. We need not be ashamed of, nor fear, what we know is true; and we need never doubt the perfection of His path. Let’s live a life of consistent belief and trust such that what we believe is directly reflected in the way we live. Let’s take a stand and live a God-honoring life…without compromise.