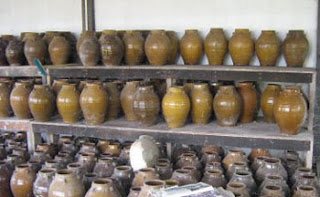 During the ministry of Elisha, a widow came to him for financial help. Creditors had threatened to take her two boys as slaves if she didn’t pay her debt, but all the woman had left was a little oil. Elisha told her how to miraculously multiply her oil and pay her bills…and in the process bring great glory to God.

2 Kings 4:3
“Go around and ask all your neighbors for empty jars. Don’t ask for just a few. Then go inside and shut the door behind you and your sons. Pour oil into all the jars, and as each is filled, put it to one side.”

The woman gathered empty jars and began to fill them from her one small jar of oil. She continued to fill the jars until each one she collected was full; “Then the oil stopped flowing” (2 Kings 4:6). The woman was able to sell the oil and pay her debt.

In our limited understanding of God we often place artificial restrictions on what we think He can accomplish, and our prayers become reduced to what we believe is actually possible. In this sense, our low level of faith has limited what God provides. Hundreds of years after Elisha we read about Peter walking on the water toward Jesus; but Peter never would have stepped out of the boat if confined to the realm of his own understanding. Peter left room for God to work beyond what he could understand.

Please do not read this message as a formula for worldly prosperity; God’s Word never teaches that we are all to be rich with material wealth! But God does desire for each of us to trust Him beyond the bounds of our best analysis, and to draw closer than what we believe is ever possible. Peter didn’t need to understand how the atomic structure of water might be altered to provide stability, he simply needed to know with certainty that Jesus was calling; “Lord, if it’s You, tell me to come to You on the water” (Matthew 14:28).

We serve an Awesome God – more awesome than we will ever comprehend; “As the heavens are higher than the earth, so are My ways higher than your ways and My thoughts than your thoughts” (Isaiah 55:9). We must never believe there is a problem too big for God to handle; “He is able to do immeasurably more…” (Ephesians 3:20). Let’s pray with a faith that truly believes our Father is the Creator of the Universe, and let’s refuse to place limits on God’s provision.