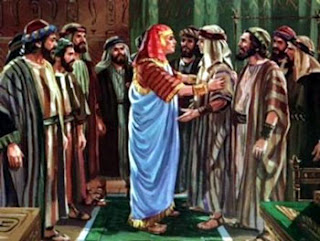 It’s never really explained how Joseph learned to trust God – but he did! He could have become very discouraged when he became a slave, but somehow Joseph adjusted to his circumstances and thrived; “The Lord was with Joseph and he prospered” (Genesis 39:2). When tempted with sexual sin by Potiphar’s wife, he kept himself pure because he did not want to “sin against God” (Genesis 39:9). But false accusations still sent him into prison.

When Joseph was sold into slavery, he had no idea of God’s awesome plan. He would spend many years in jail before receiving even a hint of God’s purpose. But God is ALWAYS at work in the lives of those who love Him. Joseph’s life must encourage us to draw near to God during times of hardship – to continue trusting and honoring Him in all we do…no matter what our circumstances!

We all go through “dungeon” seasons when life seems to take unplanned and seemingly “unfair” turns. We all, at times, feel abandoned and alone: “Has God forgotten me? Does He no longer care?” We may not understand why things happen the way they do, but if we will continue to love Him with all our heart and consistently trust Him in and through all our trials, we can be certain (and one day we will truly see) that God is in control and every situation is truly intended for good.