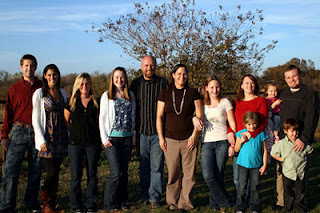 It’s hard to believe but 2011 is coming to a rapid end – and it’s been a good year! Even with the sad and tragic loss of my sister, and yes, the continuing struggles with our adult daughter, God is good. Our entire growing family was together, and genuinely enjoyed one another, on Thanksgiving, and God continued to mature each of us in special ways. Our two married children were actively involved in ministry in their local church, our two younger children took significant steps to make their faith their own, and even Stacey learned important lessons on trust.

As for my wife and I, we continued throughout this year to faithfully follow the path God placed in front of us for the short term while seeking His direction for the longer term. This has been the pattern for the last many years, but I believe this year we developed a greater peace and trust in God’s timing. We believe we have good direction for the next four or five months, but beyond that we still need to wait on God. I’ll write more about this as God’s plan unfolds.

One thing that has been made abundantly clear is that God’s Daily Word Ministries is to continue. And not just continue, but do more. Of course, the email messages will continue, but I believe I am to work on several messages related to unity. I spend a great deal of time studying Church history and the development of our beliefs, and I believe there is greater room for unity within the Body of Christ. I also believe we are to increase our involvement in foreign missions. The details of this are not yet clear, but, given my strong belief in the relational ministry of missions, I believe a trip to Africa is definitely in order.

In this last message of 2011, I also want to say thanks for all your support, both through prayers and finances. Sometimes I receive notes saying an individual wants to support this ministry but can “only do so through prayer.” We ought to really understand the importance of prayer. I have been amazed at how God has cared for, and utilized, this ministry over the last fifteen years; and I strongly believe this could not have been accomplished without the prayers of many around the world. So THANK YOU for your prayers!!

If you would like to be involved in the on-going financial support of this ministry, more information is contained on our web site at:

Remember that donations by mail need to be postmarked by December 31st in order to be recorded as a donation for 2011. Donation reports will be sent out by January 15th. Thanks again!