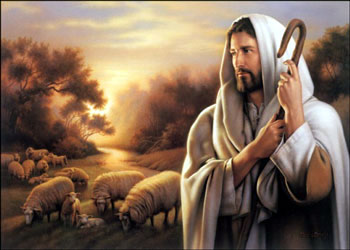 It wasn’t faith alone which allowed Peter to walk on the water, he had to apply his faith to the call of Christ. It was Jesus who provided a firm foundation under Peter’s feet as he stepped. Peter wasn’t specially gifted at water walking – he simply heard the call and obeyed in faith.

If Peter would have sailed to the exact same spot the following day and stepped out of the boat without being called, he would have sunk like a heavy stone – guaranteed! Peter could not have commanded the water to hold nor “claimed” a solid foundation for His feet – no matter how loud or sincere he made his claim! His faith would not have kept him on top of the water for even a fraction of a second. His “success” on the water was not due as much to the magnitude of his faith as it was to properly hearing and then applying his faith to the call of Jesus.

We seem to spend much of our life wandering without direction, but it is God’s desire that we follow closely after His Son; “He goes on ahead of them, and His sheep follow Him because they know His voice” (John 10:4). Do we really know His voice? How often do we set aside time to listen? If we only occasionally listen to the voice of our Lord, how will we even recognize His call? We live in a world so filled with distractions that we must not wait until the crisis of a storm. If we haven’t learned to filter out the competing noises of the world, God’s call will be lost in the crashing waves.

We must spend time away from the “noise” where we can be alone with God and learn to recognize His voice. We must establish times of quiet to read His Word and talk with Him in prayer; “Sanctify them by the truth; Your Word is truth” (John 17:17). As we meditate on the truth of His Word and pray for understanding, our spiritual filter will become tuned. Then, when we enter a storm, the noise may still surround us, but our filter will only allow a single voice to enter.

Let’s develop the discipline of listening along with the spiritual ability to filter and recognize the voice of God. Our faith will be enough to respond – strong enough to step – but we must first be able to hear the call.