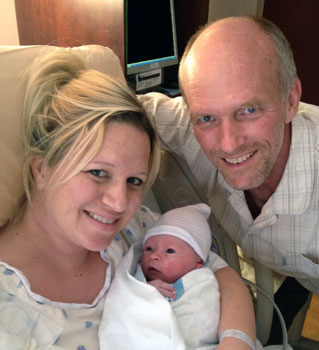 Many years ago I wrote a series of messages from the parable of the prodigal son. In this series we saw a rebellious son who took his inheritance, squandered it on wild living, and ended up eating with the pigs. But when the son returned home, the father met him with open arms: “Bring the fattened calf and kill it. Let’s have a feast and celebrate. For this son of mine was dead and is alive again; he was lost and is found” (Luke 15:23-24).

I repeat this series every couple years and it is consistently the most popular set of messages – at least judging by the responses I receive. One of the reasons is that these messages relate so well with people from all over the world. It seems nearly everyone either has a prodigal child, has been a prodigal themselves, or knows someone who is struggling with a prodigal. The other reason is that this series was always very personal.

Those of you who have been with this ministry for many years know of the challenges we faced with our eldest daughter, Stacey. There are a few of you who prayed with me sixteen years ago when Stacey ran away from home and I was frantically looking for her, wondering if she was alive or dead. Over the years, we have walked with Stacey through many poor choices which led to several years in jail and drug rehabilitation facilities. Along the way, I learned things about tough love, when your child has to eat with the pigs; but I was also taught some profound lessons about trusting God’s faithfulness and about NEVER giving up hope.

In many ways, the way God worked with the nation of Israel in the Old Testament is the way He works with individuals today. The people of Israel, as a nation, had rebelled against God. They had made many poor choices, deciding to follow their own way instead of the path established by God. God sent the prophet Joel to call the people back to a heart of worship and to warn them of the discipline which would come if they continued to walk away from God. But in this grave warning, God also promised that a day of restoration would come.

Joel 2:25
“I will repay you for the years the locusts have eaten – the great locust and the young locust, the other locusts and the locust swarm – my great army that I sent among you.”

How many of us, as we look back, can see lost years – years the locusts have eaten? These represent the times of our poor choices, our wandering from God, or the poor choices of others which affect our life. Looking back can be painful! But the promise of God is that as we turn our heart back to Him, He will repay (or restore) what has been lost. Of course, the restoration may look different than we expect, but God promises to restore! Perhaps the true restoration is in the restored relationship with God.

Stacey’s journey has been difficult and I know she would change many things if she could. But she has also seen God’s faithfulness in a very real way. Early last year Stacey met a wonderful young man, they married in July, and together have been building a marriage honoring to God. It has been a great joy to watch them work through the issues of marriage and learn what it means to keep Christ at the very center. I am very proud of them!!

Last week we had the privilege of being at the hospital as Stacey gave birth to a beautiful little girl, Isis Grace. Her birth was covered in prayer and we are confident she will be raised in a family who loves the Lord.

Parents, NEVER give up! Prodigals, young and old, turn your heart back to God. Our God is forever faithful and has demonstrated over and over that He loves us, longs for our return, and is, without question, a God of complete restoration.