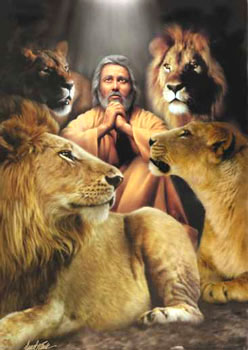 Daniel served seventy years under the kings of Babylon and his convictions earned him a place as the most trusted advisor in all the land. When the Persians defeated the Babylonians, the new king even “planned to set {Daniel} over the whole kingdom” (Daniel 6:3). But when the other officials became jealous, they convinced the king to pass a law forbidding prayer to anyone except the king.

There were many opportunities for Daniel to question his circumstances. He was taken into captivity at a young age, tempted with special treatment, despised by his peers, thrown to the lions, and served an entire lifetime under foreign rulers. But, without a single complaint, Daniel continued to trust God and serve Him without compromise. In the end, Daniel was used to encourage the Jews while in captivity and to draw an entire nation to a greater reverence of God. Shortly after the decree was issued, 50,000 Jews were allowed to return to Jerusalem to rebuild the temple.

Stories like this are scattered all through God’s Word! Though we may not understand our circumstances or be able to clearly see God’s specific plan, we KNOW the way He is calling us to walk. Let’s continue to serve and trust with all our heart. Let’s walk down His path without turning to the right or to the left. Regardless of our present circumstances, let’s determine once and for all to give Him a lifetime of conviction.