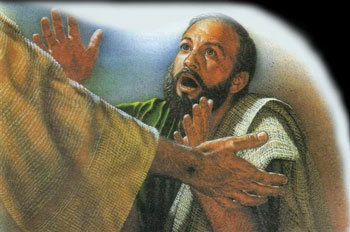 On the night before He was crucified, Jesus, while in great anguish, showed the human side of His nature and asked if there was another way for God’s plan to be accomplished; “My Father, if it is possible, may this cup be taken from Me” (Matthew 26:39a). Though He knew He would be physically, emotionally, and Spiritually tormented, nailed to a cross and hung until dead, He gave His life into the hands of the Father; “Yet, not as I will, but as You will” (Matthew 26:39b). And as surely as Jesus knew God’s plan was for Him to die, He also knew He would rise again; “And on the third day He will be raised to life” (Matthew 17:23).

On the third day after Jesus was crucified, Mary Magdalene and her friends saw the empty tomb and immediately ran to tell the disciples; “But they did not believe the women, because their words seemed to them like nonsense” (Luke 24:11). Even after Peter saw the empty tomb for himself, he was perplexed; “He went away, wondering to himself what had happened” (Luke 24:12).

The disciples had walked with Jesus and listened to Him teach about this day but they still did not understand. It wasn’t until Jesus personally appeared to the disciples that the events began to make sense; “Then He opened their minds so they could understand the Scriptures” (Luke 24:45).

In an instant, everything fit into place. They finally understood how all the Old Testament scripture pointed to the coming of Jesus and how He would be sacrificed for the forgiveness of our sins. They saw the predictions of His death…and of His resurrection. They finally saw Him as much more than a good teacher, much more than even a mighty king. His resurrection meant He was the Savior, the one and only Son of God!

Romans 1:4
“And who through the Spirit of holiness was declared with power to be the Son of God by His resurrection from the dead: Jesus Christ our Lord.”

The resurrection was God’s declaration to the world: “This is My Son!” The resurrection lets us know that “with God ALL things are possible” (Matthew 19:26), and it gives us the assurance that every one of His promises will come to pass; if Christ is truly risen, how can any trials of this world possibly lead to defeat?

True belief in the resurrection should fill us with awe and overwhelm us with a sense of peace and thankfulness. He died and rose again so we could live an abundant life and worship Him for all eternity. This Easter season, let’s place our faith in the sacrifice of Jesus for the forgiveness of our sins and live in the promise and power of His resurrection. Let’s pray for our mind to be fully opened to His truth and for our life to be lived as though we KNOW He is risen!