Right Where He Wants Us 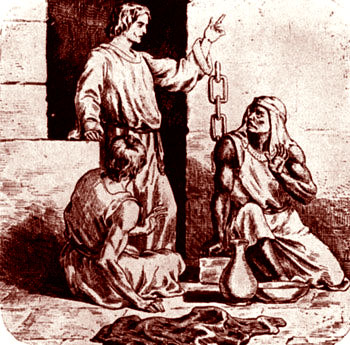 Joseph was the second youngest son of Jacob and was greatly loved by his father. In fact, his brothers developed a jealous hatred for him because their father “loved Joseph more than any of his other sons” (Genesis 37:3). Their hatred for Joseph continued to grow until they “sold him for twenty shekels of silver to the Ishmaelites who took him to Egypt” (Genesis 37:28). Joseph was then sold to Potiphar, the captain of the guard for Pharaoh, and was soon falsely accused by Potiphar’s wife and thrown in jail.

At this point, Joseph could really have felt sorry for himself – things were definitely not going well! Only a short time before, Joseph’s path had seemed well established; his father loved him, he knew where he was going, and his life was filled with joy. Now, locked up and in a foreign land, Joseph’s life seemed to have taken a drastic turn for the worse.

Genesis 39:20-22
“But while Joseph was there in the prison, the Lord was with him; He showed him kindness and granted him favor in the eyes of the prison warden. So the warden put Joseph in charge of all those held in the prison, and he was made responsible for all that was done there.”

It’s safe to say that all of us, at different times during our walk with the Lord, feel like we have been sent far away and locked up. We feel distanced from God and unable to change our circumstances. Others seem to be controlling our every move and we sink into a deep despair.

But is it possible God is much closer than we think? “Never will I leave you; never will I forsake you” (Hebrews 13:5). Is it possible He is working (even now!) this terrible situation toward the good? “In all things God works for the good of those who love Him” (Romans 8:28). And is it possible that in the middle of our “prison” God has much work for us to do?

While in jail, Joseph interpreted dreams for Pharaoh’s officials (Genesis 40) and was then called to interpret a dream for Pharaoh; “I’ve heard it said of you that when you hear a dream you can interpret it” (Genesis 41:15). Joseph interpreted Pharaoh’s dream and was placed in a position of great responsibility; “You shall be in charge of my palace, and all my people are to submit to your orders” (Genesis 41:40). It was God’s plan to place Joseph in control of the distribution of food, and therefore, to save many lives…including the lives of his father and brothers (Genesis 42-48).

No matter what this day brings – no matter how trapped we feel – we must keep looking for God’s good and trusting that His plan is unfolding. He is using our circumstances to mold us and draw us close to His side; and He is using our testimony of faith to encourage others to love Him more. We must believe that, even in the middle of our prison, God is in control and we are right where He wants us!