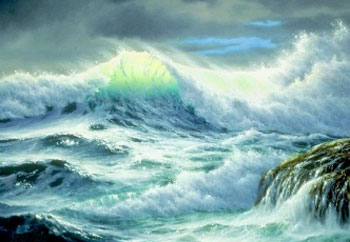 Immediately after feeding five thousand men, plus women and children, with five loaves of bread and two fish, “Jesus made the disciples get into the boat and go on ahead of Him to the other side” (Matthew 14:22). The disciples had begun to cross the Sea of Galilee when a storm arose which caused them to “strain against the oars” (Mark 6:48). It was the middle of the night, and after already rowing about three and a half miles they found themselves fighting against the wind and waves.

Why had this happened? The disciples had done exactly what Jesus told them to do and now they were facing a major struggle. They had clearly heard and obeyed but they were still confronting a very difficult situation. The story continued as Jesus walked on the water, called Peter out of the boat to join Him, and then miraculously calmed the storm. But couldn’t the struggles have been avoided by telling the disciples to simply wait until morning to travel?

Matthew 14:33
“Then those who were in the boat worshiped Him, saying, ‘Truly You are the Son of God.'”

I do not believe that all storms are directly from God; but as was the case with the disciples, Jesus often sends us into a storm for the purpose of revealing Himself and drawing us closer to His side. While in the middle of a storm, we can see God’s love and witness His ability to protect, strengthen, and guide. “These {storms} have come so that your faith – of greater worth than gold, which perishes even though refined by fire – may be proved genuine and may result in praise, glory and honor when Jesus Christ is revealed” (1 Peter 1:7).

Our Father loves us very much. He loves us enough to give us His Son as a sacrifice for our sin; enough to give us His Spirit as our guide; enough to never leave us, and enough to finish the good work He began in our lives. Let’s receive His love and learn to rejoice in ALL things. Let’s learn to look with new eyes and see His hand working around us each and every day. Let’s praise Him and look for new revelations of His love, even as we are sent into the storm.