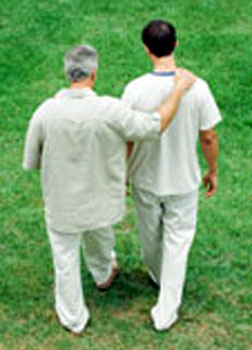 The parable of the prodigal son contains so many practical lessons on relationships (particularly for parents) that we often forget Jesus spoke this parable in response to an accusation from the Pharisees; “This man welcomes sinners and eats with them” (Luke 15:2). The message of the prodigal son is really about our Heavenly Father who rejoices every time a “sinner” turns their heart to Him in repentance. But why did Jesus talk about TWO sons? What was the message of the son who remained at home?

This was the son who walked the straight and narrow – walked the path of disciplined obedience – but he missed his opportunity to receive true blessings as he walked.

The son had been “slaving” in the hope of a future blessing, but his heart was not joyfully serving. He missed the real blessing of walking with his father and having free access to everything his father owned.

As believers in the saving grace of Jesus Christ, we understand that people can be saved at any point in their life – regardless of past sins. The thief on the cross received his Salvation only moments before he died. But there is always part of us that cries “foul!” Somehow it doesn’t seem fair when others have worked so hard for so long.

This attitude shows we also have missed the blessing of walking with our Lord. Heaven is never a reward for “obedient” living; it is a free gift to those who believe in Jesus. We should never feel we are “slaving” under the burden of His commands in order to earn His favor. Rather, we are to joyfully follow because we know that only in Him, only walking with Him in a loving relationship, is there true peace, true contentment…true blessings!

Let’s follow our Lord with a firm perspective of eternity, but let’s never become so focused on the future that we miss the blessings given to us today – the blessings of the journey! Let’s renew our joy at being allowed to walk every day with our Heavenly Father and rejoice whenever a repentant heart returns home. Let’s never make the sad mistake of living the burdened life of the other son.