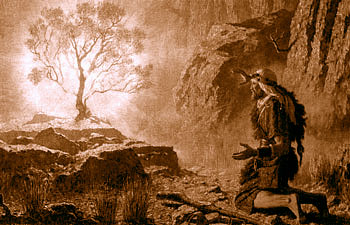 In the last two messages we’ve considered the high value placed on being in the courts of God where we are able to worship in His presence. We also saw the need for quiet times of prayer in order to strengthen our relationship with God and receive His direction. No walk of submission and obedience can be complete without actually spending time with God to hear where He is leading.

Moses was born a Hebrew slave under Egyptian rule, but circumstances allowed him to be raised as a prince in Pharaoh’s court (Exodus 2:1-10). As a young man, Moses began to see the injustice toward the Hebrews. At one point he took matters into his own hands and killed an Egyptian for mistreating a Hebrew slave. This action caused Moses to be misunderstood by the Hebrews and hunted by the Egyptians, so he fled across the desert to the land of Midian where he settled as a shepherd.

Going from Egyptian prince to Midianite shepherd was quite a change. As a prince, Moses received the finest education as well as the most advanced military training, but it was as a simple shepherd that Moses received the training he most needed to accomplish God’s work.

Moses was a peaceful shepherd for 40 years, but then “The angel of the Lord appeared to him in flames of fire from within a bush” (Exodus 3:2). The bush was on fire but not actually being burned. This definitely got his attention so Moses went to take a closer look.

Exodus 3:4
“When the Lord saw that he had gone over to look, God called to him from within the bush, ‘Moses! Moses!’ And Moses said, ‘Here I am.'”

Notice that God waited until Moses saw the bush, stopped what he was doing, and drew himself near. I wonder how long this bush had been burning before Moses noticed? During the last 40 years, how many “burning bushes” were placed in his path? “Be still, and know that I am God” (Psalm 46:10). How long had Moses needed to experience the “stillness” of tending the flock before he was ready to hear God? Oh Lord, help us to be still!

God is at work all around us, and He’s calling us to join Him today. The bushes are burning, but in the hurriedness of our daily lives we most often fail to notice – fail to stop and draw near. Is it any wonder we have a hard time hearing His call? What will we see when God allows us to look back at the life we might have lived if we would only have taken time to listen?

Let’s not miss the opportunity to participate in God’s wonderful plan. Let’s create time to be very still and look intently for where God is working. Then, with great expectation, let’s join Him and draw near to the burning bush.