Too Much of Us 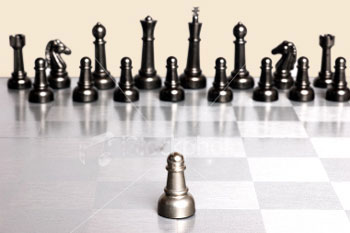 Gideon lived during a time when Israel was ruled by judges. This was the period after the death of Joshua and before Saul was anointed king – a period lasting approximately 325 years. During this time, the people continually wandered away from God and were oppressed by various groups. But God always rose up a leader (a judge) who would deliver the people and lead them back to Himself…at least for a short while.

The oppression by the Midianites was so severe that many Israelites lived in caves and harvested their crops in secret. When the people cried to God for help, He chose to use Gideon; “‘But Lord,’ Gideon asked, ‘how can I save Israel? My clan is the weakest in Manasseh, and I am the least in my family'” (Judges 6:15). God wanted His Children to know that true deliverance is only through His strength and by His grace. By using Gideon to save the people, God taught a valuable lesson of trust. Gideon gathered an army of 32,000.

Judges 7:2-3
“The Lord said to Gideon, ‘You have too many men for Me to deliver Midian into their hands. In order that Israel may not boast against Me that her own strength has saved her, announce now to the people, “Anyone who trembles with fear may turn back and leave Mount Gilead.”‘ So twenty-two thousand men left, while ten thousand remained.”

God’s message of grace and power would not be obvious if the army had any hope of victory by their own strength: “But the Lord said to Gideon, ‘There are still too many men'” (Judges 7:4). Gideon’s army started with 32,000 but he was not sent into battle until the army was reduced to only three hundred. These were impossible odds! But God always reigns supreme in the impossible: the battle was completely victorious!!

God is never interested in the “wonderful” things we can do for Him. He is pleased only by our obedience and our trust. In fact, God allows many of our great endeavors to fail simply because they are being pursued without giving Him absolute control. We are never to rest in our own strength and ability; rather, we are to continually walk by faith. Several hundred years after Gideon, the prophet Isaiah gave this same message: “Woe to those who trust in the multitude of their chariots and in the great strength of their horsemen, but do not look to the Holy One of Israel” (Isaiah 31:1).

God will lead us into victory, but we must give Him our total trust. When we walk in His victory, we will have the joy of witnessing His mighty hand and find true fulfillment in bringing Him glory and honor. His victory is never by our strength, savvy, cunning, or intelligence. It is only as we trust Him to work in and through the empty vessel of our life. True victory will only be won as we go into battle with ALL of Him and without too much of us.