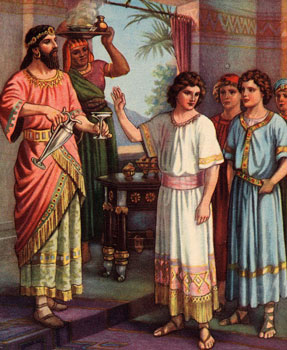 Although Daniel was determined not to partake in the ways of his captives, his initial approach was to graciously ask permission for himself and his friends to follow their convictions. Daniel was resolved, but he also knew the importance of serving God through his interaction with other people.

We must be firm in our resolve not to defile ourselves by compromising our convictions or lowering our standards – our lives as well as our message must remain true to God’s Word. But we must also be gentle as we keep the doors open for the opportunity to minister and shine His light into the darkness. Our convictions must stand; and yet, they must be implemented with true grace and compassion. Let’s show the world around us the unfailing and never-changing love of God through a firm and gentle resolve.