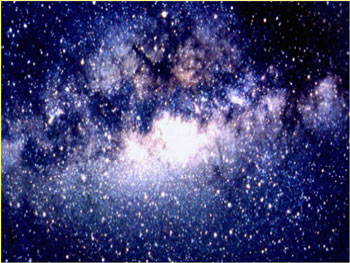 But as incredible as our night sky appears, the facts of our universe quickly become staggering. During the day we see the sun – which is really just the closest of all the stars. Our sun, though it appears large, is a relatively small star located 93 million miles from Earth. This distance is about the same as traveling around the world 4,000 times. And though this distance is hard to comprehend, the next nearest star is 270,000 time further away. But that’s only two of the 200 billion stars in our Milky Way galaxy – a galaxy which takes light 100,000 years to travel from one end to the other!!

We who believe that Jesus Christ died for the forgiveness of our sin become a testimony of praise to God’s glory and grace. In the same way, the immensity of the stars give testimony; “The heavens declare the glory of God; the skies proclaim the work of His hands” (Psalm 19:1). I can barely understand the distance to our sun, let alone the size of our galaxy or the size of the Universe; and I’ll spend a lifetime trying to comprehend the “size” of our God; “The heavens proclaim His righteousness, and all the peoples see His glory” (Psalm 97:6).

One response to “All For His Glory”