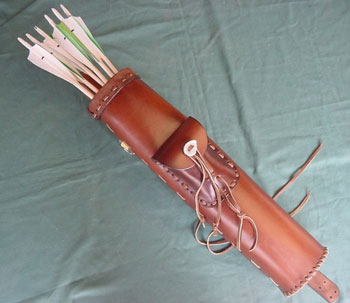 On Friday I sent a Family Update message in which I wrote about how blessed I am by all my children. In that message I made use of the passage which refers to children as arrows in our quiver: “Like arrows in the hands of a warrior are children born in one’s youth. Blessed is the man whose quiver is full of them” (Psalm 127:4-5).

Little did I know that as I was writing the note a crazed young man was breaking arrows in an elementary school. By the time I sent the message, six adults and 20 children had been murdered. These are arrows which will never be allowed to fly, never be drawn back with a bow and sent speeding toward a target. I can’t get this out of my mind; the sadness and utter incomprehensibility is overwhelming.

In the days since this senseless slaughter, there has naturally been much discussion related to cause; why did this happen? There has been talk about gun control, the violence in television and video games, psychological problems, and family dynamics. And, through it all, the question “Where was God?” had to be asked. Where was God, and what does it say about Him when tragedies such as this occur? Many are saying it’s an unfair question since we have pushed God out of the public schools and out of our country. Others are saying this is simply a reflection of who we have become and God has given us “over in the sinful desires of {our} hearts” (Romans 1:24). And some terribly insensitive and theologically ignorant preachers have said this is a judgment from God or was directed by God to cause people to repent. I still have many questions, but one thing I know: this was NOT from God.

The question of God and evil has been around since the first discussions about God. Soon after the time of Jesus, there was a group who tried to solve the problem through different emanations of divine beings, some good and some evil, which completely separated the good God from evil. Others thought they solved the problem by defining evil as the absence of God, again removing the good God from evil. But in the end, no explanation seems to satisfy our need for an answer.

Perhaps there is simply no answer. God is real, and evil is real. Evil happens. And rather than trying to explain God’s involvement, or lack of involvement, in evil, perhaps we ought to focus on what we know to be true about God – He restores.

Psalm 71:19-21
“Your righteousness, God, reaches to the heavens, you who have done great things. Who is like you, God? Though you have made me see troubles, many and bitter, you will restore my life again; from the depths of the earth you will again bring me up. You will increase my honor and comfort me once more.”

No, there is no adequate answer about the cause of evil. But there is always an answer about what to do after evil has occurred. We are to draw closer to God and allow Him to heal; to encourage; to restore; “And the God of all grace, who called you to his eternal glory in Christ, after you have suffered a little while, will Himself restore you and make you strong, firm and steadfast” (1 Peter 5:10).

One of our favorite passages on the sovereignty of God is: “And we know that in all things God works for the good of those who love him, who have been called according to his purpose” (Romans 8:28). Please do not interpret this passage to say that God planned for this evil because He is working toward a greater good. Rather, read this passage for what it really says. God will work all things – including every kind of evil – for good as we draw near and love Him and align our life with the purpose to which we have been called. God has not promised to eliminate evil; He has promised to restore what evil has torn down and tried to destroy.

The tragedy of last week is more than my heart can bear, certainly more than my mind can understand. As I prayed with my younger children this weekend I also fervently prayed that I never have to face this kind of trial. I have no words of explanation, but I believe we have been given definitive words of comfort. We have not been abandoned. He is always here. And as we draw ever closer to His side, He has promised to restore the broken arrows.

One response to “Restore The Broken Arrows”