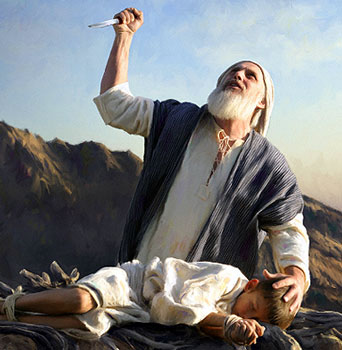 In the message “The Mountain of Faith” we were encouraged to believe with a faith which is secure enough to surrender ALL to our Lord and Savior. We saw an example of this faith in Abraham as he was given a son and then told to surrender him as a burnt offering; “Take your son, your only son, Isaac, whom you love, and go to the region of Moriah. Sacrifice him there as a burnt offering on one of the mountains I will tell you about” (Genesis 22:2).

Without any debate or even apparent doubt, Abraham set out with Isaac and a bundle of wood and began to obediently climb the mountain of faith. What special quality did Abraham have which allowed him to make such a climb? Only one! He believed God; “Abram believed the Lord, and He credited it to him as righteousness” (Genesis 15:6). Clearly, belief is tied directly to trust and obedience. Abraham believed God had a purpose for giving him such a command and he immediately obeyed.

Many of us are longing for clear direction from God. Although we probably pray that His direction does not require the extreme sacrifice of Abraham, we are ready to follow and are currently in a mode of waiting. Waiting can be very frustrating and sometimes cause us to speed up God’s timing. But we must continue to patiently seek the Lord, trust there is a purpose in the wait, continue to grow and mature, and be obedient to the things God has already given us to do. His direction will come – and when it does, we must be prepared to follow.

And yet, there is a mature part of Abraham’s climb we often overlook. Perhaps if Isaac had been born ten years earlier, Abraham would not have been mature enough to make such a climb. Abraham’s mature faith had learned to ALWAYS keep his eyes on the Lord – always listen for His leading – even after his direction appeared clear.

Genesis 22:9-11
“He bound his son Isaac and laid him on the altar, on top of the wood. Then he reached out his hand and took the knife to slay his son. But the angel of the Lord called out to him from heaven, ‘Abraham! Abraham!’ ‘Here I am,’ he replied.”

What would have happened if Abraham had become so focused on “the mission” that he failed to listen for the voice of the Lord? Abraham was being obedient to the call of God, but right at the point of absolute obedience, God changed direction; “Do not lay a hand on the boy” (Genesis 22:12).

The call of God is not a one time event; it is an ongoing, moment by moment relationship of love. We are never sent on a mission which leads us away from the presence of the Lord. Rather, we are called to follow, making the journey hand in hand, and step by step. Let’s continue to grow ever closer to our Heavenly Father. Let’s trust Him more, love Him more, and always, always, always, listen as we climb.