Hold Up Their Arms 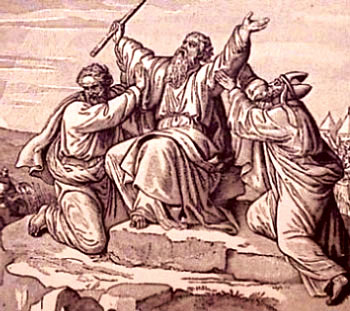 A short while after Moses and the people of Israel miraculously passed through the Red Sea, “the Amalekites came and attacked the Israelites” (Exodus 17:8). The Israelites did not have the power to win this battle on their own, so Moses sent Joshua to the battlefield and then climbed to the top of a hill: “I will stand on top of the hill with the staff of God in my hands” (Exodus 17:9).

God had previously demonstrated His power as Moses raised his staff to part the Red Sea (Exodus 14:16). He had also told Moses to use his staff to cause water to flow out of a rock (Exodus 17:5-6). Moses was now trusting God to demonstrate His power once again as he lifted this same staff in battle.

Moses knew what he had to do, but he simply became worn out. Fortunately for the people of Israel, Moses had two trusted companions who stood by his side and were willing to hold up his arms until the battle was won.

Many people have committed their lives to fighting the battle for the Kingdom of God. These, who are daily on the front lines, feel greatly outnumbered and are prone to grow weary. They desperately need an Aaron and a Hur to come alongside with prayer and encouragement.

I feel very fortunate to have people all over the world praying for this ministry. Almost every day I receive notes of thanks and encouragement. This is a wonderful blessing and a confirmation that I am on the right path!

Our pastors, ministry leaders, missionaries, and those who continually look for ways to serve, need this same type of support; “Encourage one another daily, as long as it is called Today, so that none of you may be hardened by sin’s deceitfulness” (Hebrews 3:13). Those who faithfully serve may appear strong and confident, but they come under daily attack and their arms are getting very tired; they need to be reassured and loved. Our missionaries have stepped out with great faith, but they are also very lonely and need to know someone still cares.

Many of our Brothers and Sisters are on the front lines of battle today. Let’s join them by becoming a continual “supply line” of encouragement and prayer. Let’s be like Aaron and Hur, and hold up their arms!