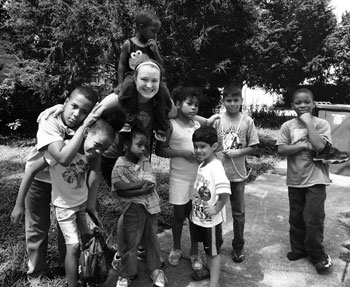 I am in Ohio this week for the Pan Hope Ohio Bike Ride for the American Cancer Society. While I am away, I thought you might like to hear from my daughter, Sarah, who has been working with an Urban Ministry in Memphis, TN. Sarah’s job has been to help host youth teams from around the country as they come for a week to minister into the urban community. With different teams each week, staff members like Sarah become the consistent portion of the ministry as they conduct Bible clubs and work projects in a way that conveys the love of Christ. Each week Sarah has written short update messages. I will send out two each day. I pray you will be blessed!

What a week of adaption, preparation, and education I have had! Your prayers have been powerful, for each day I have been able to trust The Lord more fully and see His direction for my summer.

I was assigned to the Bible club site called National. It is fairly large, has lots of trees, and is one of the more racially diverse sites. My senior staffer, Gaby, with whom I will be working closely all summer, is kind, organized, and very passionate in her love for the kids. She has assigned me to a walking route with a primarily Hispanic population, and she says that trust building is of the essence with this route.

My afternoon project assignment is yard work. I am told that my primary role will be to organize team members and keep them working hard. My more exciting role is to pick one or two team members and go into the houses to build relationships with the community members we serve.

An extra leadership assignment I received is “welcome team.” I will be one of the first three people to greet the mission teams in the parking lot. We will introduce ourselves, pray for the team, and show them their rooms.

This week, the mission team count is small, so only three sites will run. National will be one of them. Pray that the team will set a precedent of love and truth, as they will be the first team the kids see this summer. Pray that I will begin to form grace-filled relationships with the families on my walking route. And pray against the spirit of fear of violence in the broken lives of the kids we will minister to.

I have learned a lot about prayer this week. At first, this surprises me, because the staff never prays aloud together. Not once since I stepped foot in Memphis have I heard prayer or prayed aloud with a staff member. Yet I know these are a praying people. Their entire ministry is proof. There is no way an endeavor as radical as this in a place as dark as this could succeed without prayer. Pastor Tim spoke last week about the fierce spiritual warfare here. All the staff, every mission team that will come, and I are soldiers. When Satan sees his darkness being attacked, he is furious. He will do everything to stop us, so we must know our weapons. Prayer is vital. The first thing Gaby told me after I was assigned to National was, “Start praying now. If you don’t pray, National will fail. When you picture the site, don’t just picture it; pray for it. When you think about your kids, don’t just think about them; pray for them.” She sent me a list of 300 kids’ names who have ever come to National so I could begin to pray for them. It was such a healthy process for my own heart to go through, but I also believe it had eternal impact. On this note, a few days ago I was suffering guilt from forgetting to pray for a few individuals. I confessed to God, and He assured me, “Though you are forgetful, I am not forgetful. I continue to hold these individuals in my hand. Turn now, and develop a heart that calls to Me due to your love for them and your trust in me.”

He is teaching me much. As I develop this heart, I would love to be praying for you and the kingdom-building work that surrounds you. If there are specific ways, please write me back. Know that, as I pray, it is not a burden but a jubilant opportunity to fulfill God’s command.

The first official week of Street Reach went very smoothly, to the surprise of many staff members. The team that ran the National site had never been to Street Reach before, but they were excellent. It was evident that they truly loved the Bible club kids, their fellow team members, and even me.

The most significant part of my week was meeting all the families on my walking route. Today a realization of the obvious hit me: this past week I only got to read the introduction to the novels about how these peoples’ lives will intertwine with mine. After only a week I already go throughout my day and fall asleep thinking of these parents’ and kids’ faces and wondering where their stories will lead one month, two months, from now. I will get to see these same faces every day for an entire summer. You will read the plot twists and cliffhangers each week, but I must watch the story caterpillar crawl along ever so slowly. Today I will give you the character list in the order that I knock on their doors:

Hector Perez – This bilingual five-year-old stands out among the rest for so many reasons. His story is inspiring: The staff member who previously walked this route was named Erica. She knocked on the Perez’ door every day for an entire summer to invite the kids to Bible club and was refused each time. The next summer she began again. After four weeks of knocking, Hector finally came. Now Hector is one of the best proponents of Bible club. This past week he has consistently and passionately told me which houses he wanted to invite. We pray together before we knock, and after we are refused or there is no one home, we pray again. Hector is short and stocky, but he can run wickedly fast. He loves to carry my backpack for me. Please pray for his further influence on other children.

Charles and Brooklyn Golding – Charles, seven, and Brookbrook, four, are the most beautiful siblings. Charles is adorably protective of Brookbrook. Both necessitate constant piggyback rides. I don’t know yet what they know about Jesus Christ, but they are both very kind. Please pray for deepened conversations, especially with Charles.

Viola, daughter of Itzel – this four-year-old has not come to Bible club yet. Her mom, though cautious, is actually willing to let her go, but Viola is very scared of me. She has a cleft palette and several gold teeth, cries often, speaks only Spanish, and is absolutely adorable. On Wednesday she was about to come with us. Itzel told me that Viola doesn’t walk well, so I picked her up to put her on my shoulders. She burst into tears and wouldn’t come that day. Please pray that she would grow to trust me in the next several weeks.

Xander – He is a quiet Caucasian four-year-old who came to Bible club for the first time on Thursday.

Miss Laura, Gabby, and Rodger – This family has lain heavily on my heart. Every day I knocked. Every day five-year-old Gabby and four-year-old Rodger peeped their shiny blue eyes around the curtain through the cracked window. Every day Miss Laura, with her deep gravelly voice, said no. Every day the kids’ eyes became less and less shiny. I don’t know whether Miss Laura is their mother, grandmother, or aunt, but I know she has medical problems. Tuesday she had an oxygen tank with tubes running into her nose; Wednesday she had a cigarette between her lips; Thursday she told me she was very annoyed with her doctor. On Friday, Xander gave them an extra goodie bag from Bible Club. If you pray for even one of the families on my route, please pray for this one.

Juan – He’s a seven-year-old who came to club for the first time on Thursday. He and Charles formed an instant friendship. Pray that I may see his needs and be equipped to meet them.

Davin, James, and Elijah – These three musketeers from a beautiful union of chubby pink, sturdy brown, and lanky tan. They have been coming to Bible club for years, and I have already witnessed their trust in The Lord. They love to tell famous legends on our walk. This has led to some neat conversations. Elijah is being raised by his grandma and is struggling with what it means to be a man; James told him some stories of King Arthur. Yesterday we saw a sheep, so Davin told the parable of the lost sheep. Imagine my joy to see such a young Christian community!

It feels as though the story caterpillar is barely inching by, and I want to shout at it to move faster. But the truth is that it was a miracle to have begun so many relationships in only a week. Praise God! May these families grow in knowledge of our Lord Jesus Christ every day, and may I faithfully love them with the love that Christ has lavished on me.