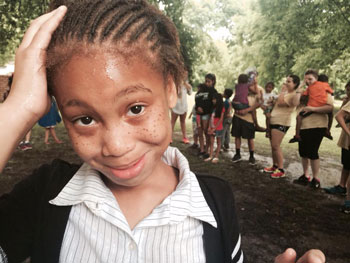 I am in Ohio this week for the Pan Hope Ohio Bike Ride for the American Cancer Society. While I am away, I thought you might like to hear from my daughter, Sarah, who has been working with an Urban Ministry in Memphis, TN. Sarah’s job has been to help host youth teams from around the country as they come for a week to minister into the urban community. With different teams each week, staff members like Sarah become the consistent portion of the ministry as they conduct Bible clubs and work projects in a way that conveys the love of Christ. Each week Sarah has written short update messages. I will send out two each day. I pray you will be blessed!

Let me warn you now and say that this update is not a very sunny one, literally or figuratively. It rained at Bible club for almost the whole week. A rainy Bible club, complete with dancing and puddle sloshing, is actually quite an enjoyable experience. Much stormier were family experiences this week. I’ll start with Davin.

Remember Davin? The 8 year old pink piglet who loves The Lord. On Tuesday I approached his house where he sat on the porch with his grandma. He ran up to me in tears saying “Miss Sarah, listen, Miss Sarah,” and proceeded to tell me that the night before, his mom and dad had a huge fight. That morning, his mom had bought plane tickets to Florida and was leaving with Davin at 2:00 that afternoon. I took his hands and sat on the pavement that the rain was beginning to pelt. “Tell Miss Gabby I love her,” he said (Miss Gabby is my senior staffer whom Davin has known for three years). He told me he was so nervous, but he knew God would be with him and “mama says we’re gonna have a good life in Florida.” As we prayed together, I could see his trust in God weaved into his knit brow and tensed hands. I marveled at the instability of his life. This boy had lived in the same house and come to Bible club as long as he could remember, and less than 24 hours after a fight, he would be gone. What else could he do but rely on a stable God?

Davin isn’t the only kid I lost this week. Each day I knocked on Charles and Brookbrook’s door and no one answered. Finally on Friday Charles III (daddy of Charles IV) answered. He told me this story: Earlier that week the mom had a mental breakdown and started attacking him and the kids. The next day she was committed to a mental hospital for a several month term. Without the extra income Charles III had to get another job and send the kids to live with relatives across town. As he spoke, I examined the Christian-themed tattoos on his arms and listened to the gravity and care in his voice. I believe he is a relatively good father. He said he visits the kids after work, but they cry every night. As I prayed with him, I observed the same desperateness and devotion as in Davin.

A cycle of brokenness. My own heart is broken by the way the brokenness in their families pulled these kids away from their homes, from Bible club, and from me. So much brokenness rubbed its dirty nose it my face this week. I don’t want to overwhelm this update with negative stories, because God is also doing powerful works of restoration. But I must share one more story of brokenness.

There is one family who contributes to a large portion of our Bible club population. This 28 year old mama has 8 beautiful children. The ones who regularly come to Bible club are favorites among the mission teams. Most of them, even 7 year old Kevion, can’t speak coherently, but in mysterious maundering. The team members just smile and say, “you make no sense, but you are adorable.” On Friday, I was walking back from my route with a gentle and shy team member named Star. As we approached Kevion’s house, we heard a series of sounds like belly flops off a diving board. We heard screams followed by laughs followed by screams again. The mama was chasing Kevion around the yard like a twisted game of tag. She would periodically grab him and slap him mercilessly, his arms, his legs, his face; only to let him go and burst out into a terrifying laughter. We walked on. In a moment of heat, I fiercely took Star’s hand and said, “This does not end when you leave on that bus today. His life will continue like this even when you’re gone. Pray. Pray. Pray. Please, pray.” Quietly she uttered, “I will.”

An hour later, before she left, she told me, “The theme of this week is a line from ‘Revelation song’: ‘Break my heart for what breaks yours.’ Sarah. I’m broken.”

Yes she was. And so was I. But this was a different kind of brokenness. A crack in our pride, our selfishness, and our ignorance. I am now praying that God’s love and grace might spill through the cracks.

What a refreshing week at National Bible club! FBC Fisherville loved and served our kids so well that Gaby and I were able to simply watch without anxiety as Jesus poured out joy upon joy through the team. Hailing from a mere half hour drive away, this team is one of our local missions teams. I am very encouraged by their desire to stay in contact with the kids throughout the year.

Though we walked fewer routes than last week, we still had kids pouring into the park, reaching a peak at 48 kids on Thursday. The kids were pumped up at songs, especially when they got to do motions with partners. They were thrilled with the crafts that tied back to the Bible stories. They were constantly giggling as they wielded pool noodles and waddled in flippers at games. They were amazingly attentive to Bible stories about God’s faithfulness to his people, such as Moses and Naman. Each day they learned a new name for God and attribute of God’s character to shout loudly. They even took a “field trip” to see their Bible club neighbor, Mr. Sheep, as they read Psalm 23.

What struck me about this team was the genuineness of their love. So often as believers we serve with faulty motives–to feel good about ourselves or to gain praise. This team was an excellent example of service that is truly motivated by Christ’s love. They loved when they thought no one was watching. They loved without age boundaries; even the elderly men and women on our streets. They loved those hardest to love.

On this note, I observed something miraculous in one little boy who typically wreaks the most havoc at Bible club. It’s not abnormal to see him ripping crafts, running out of stations, or pushing kids. But this team believed in him, that he was loved by Jesus and that his heart could be changed to good. They saw each interaction with him as a divine appointment. They were willing to wrestle him to the ground if necessary. It took a whole team, but by Friday I saw an abundance of joy on his face as he participated in stations and hugged the team members. What a radiant smile that boy has when uncovered by relentless love!

And on a more personal note…

At Bible club we have a rule against checking. Checking is when kids try to show up one another through insults, and it usually precedes a fight. This week, two boys got into a very interesting checking match: “Muh duddy’s biggo dun yo duddy.” “Nah ah! My daddy’s bigger dan yah daddy!” “Uh! Muh duddy’s skrongo dun yo duddy!” “Wah! My daddy’s stronger!” I was about to shout our rule “No checking!” when I realized “Hey! I can join this checking!” I looked at the boys and exclaimed, “Guess what! My daddy is bigger and stronger than any of your daddies!” (They looked offended), “because my daddy is God.”

“Huh?! How is God yo duddy?!” Boy #1 asked with a face confused to the point of disgust.

I explained the many reasons God is my daddy.

An update on Charles III: On Monday he packed up the household belongings, put them in storage, and turned himself in to a rehab center. I was lamenting the likely permanent loss of Charles IV and Brookbrook, who have come to Bible club for two summers, when a team member said, “This really is the best thing that could have happened for them. Their dad made a very hard, wise decision. We selfishly want them at Bible club. But we only have them for two hours a day, and they have to go home to a drunk father and a mentally unstable mother. Now there is at least a chance for healing and stability.”

Davin is back from Florida! Praise Jesus! I was having a bummer day when I saw him across the street. We both shouted and did that unrealistic running in slow motion thing. His mom decided she had made enough of a rebellious statement, and she couldn’t fend for herself. So my boy, who teaches me so much about how to eat Takis, and “catch bad guys”, and love well, is home.

Have a blessed Sabbath rest today.