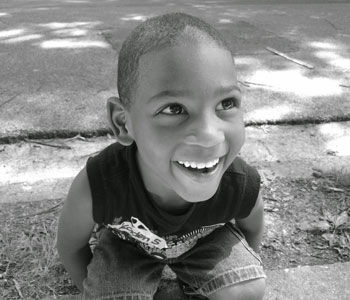 I am in Ohio this week for the Pan Hope Ohio Bike Ride for the American Cancer Society ( http://main.acsevents.org/goto/Troxel ). While I am away, I thought you might like to hear from my daughter, Sarah, who has been working with an Urban Ministry in Memphis, TN. Sarah’s job has been to help host youth teams from around the country as they come for a week to minister into the urban community. With different teams each week, staff members like Sarah become the consistent portion of the ministry as they conduct Bible clubs and work projects in a way that conveys the love of Christ. Each week Sarah has written short update messages. I will send out two each day. I pray you will be blessed!

Another week; another journal-load of curly-haired, liquid-eyed, scrawny-limbed stories to make me praise Jesus. I was telling a friend the other night that I don’t typically have a huge, dramatic story to share, but a hundred that are equally itty bitty but still significant. That’s why it’s hard to decide what to share. But here are three itty bitties:

-Ms. Laura and the grandkids-

Ms. Laura’s story caterpillar made a few caterpillar-sized leaps and bounds this week. Here’s a refresher: Ms. Laura is the lady with the deep, gravelly voice and the skeptical eye querying me. She is hooked up to an Oxygen tank most of the time. She takes care of her son’s three and four year olds, Ronnie Jo Jr and Lil’ Gaby. They have never been allowed to come to Bible club, but I have knocked on their door every single day. I ask them about Bible club less often now, so I usually just visit, introduce the new volunteers of the week, or get some of the Bible club kids to bring their puppy. Two weeks ago, Lil’ Gaby opened the door and boldly announced, “I don’t want you to come to my house no more!” After which she burst into a fit of giggles. My deduction was that Ms. Laura told her to say that.

It may seem obvious that a concerned adult would not let young children walk to the park with random strangers. But remember; the typical response on these streets is for mommas to shove their babies out the door, diapers and all. Sometimes we end up with a ten-month old in our arms, though we try to avoid it.

On Wednesday, I was having a rough morning. So as I walked up to Lil’ Gaby’s, I decided I was going to take the plunge and ask for a hug. After a few refusals from Lil’ Gaby, Ms. Laura said these exact words, “C’mon Lil’ Gaby. She’s not really a stranger anymore. She’s come to our house every day now.” My insides did a backflip for joy that they acknowledged my consistency (of a month now) and advanced me from the realm of stranger to whatever comes next. Lil’ Gaby gave me the tiniest hug, and as I walked away she shouted, “I yuv you! I yuv you!” Ms. Laura made the most astonished face I’ve seen her make yet. Woah 🙂

Thursday, Ms. Laura reported that Lil’ Gaby was in the back with the kids’ mom, a notable occurrence because the mom only shows up “once in a blue moon.” Ms. Laura paused as she looked at her feet. Then she looked up and said, “I need you to pray for their mom.” Ms. Laura is not one to use any sort of church language or religious references, and we have not had any spiritual conversations so far. So I was very surprised. We prayed. I do hope that as we establish trust they come to Bible club one day, but for now I relish in the opportunity to minister to them right where they are.

In the past two weeks I have gained a most devoted personal assistant and friend. I am unsure if I have ever met a more mature, responsible, and kind nine-year-old than Dekayla. She wants to knock on doors and speak to the residents for me. She wants to carry either my backpack or a child. She wants to stay at Bible story instead of move to games so she can help the four-year-olds listen. She always reminds me to visit Ms. Laura’s house. The other day I saw her cleaning up the lunch trash of an entire station by herself.

One thing she has taught me is the importance of actions over ideals. I always like to talk about the conceptual aspects of love and Christlike living, but all a nine-year-old knows how to express are tangible examples. I’ll tell her a verse that motivates us to love, and she’ll respond by telling me how she saw angry five-year-old Chris share his chips with angry four-year-old C.J. at lunch. I’ve been reminded that all my talk amounts to nothing if I don’t live it out.

Granted the importance of action, we must discuss concepts to motivate action. And some five-year-olds know how to hold a pretty topnotch discussion panel.

This week the Bible story teachers told me they didn’t know how to talk to kids and asked if I would teach Bible story. That caught me off guard, but we got to have some neat conversations with the kids. On Friday I had a plan for the 4-6 year-olds, but instead I listened to Cruz, Junior, and Lillian preach. I’ll give you a little snippet of unaltered conversation:

It was a rough week. On Wednesday I got moved for the rest of the week from my site (National) to another site (Rosamond) that was running 80-something tougher kids with only 11 not-so-tough team members. It’s only been four days, but I already miss my National kids. I think God used the switch as a wakeup call to not take my kids for granted. He also used it for a lesson in my inadequacy and to open my eyes to a new aspect of violence in this community.

On Thursday I was walking home fourteen kids. I heard some checking so I pulled one kid to the front to reprimand him and say that God made the people he was hating.

“God didn’t make um! The Devil made um!” He shouted.

I heard a volume increase behind me, and when I looked behind me, two older kids were getting closer and closer in each other’s face.

The next moment a smacking, punching, eye-scratching brawl broke out. A thrashing jumble of the limbs of five large boys and girls. The adrenaline surged through me and I threw my arms around one of the girls. I carried her a few yards before I dropped her in the grass from her heaviness. I tried to do the same to the others, but I felt totally outmanned. I sent the terrified team member sprinting to get the other staffer, Ashley, on site. A grandma helped me sit down one of the girls on her porch, but there was no way to instill any measure of calm until Ashley showed up. Then my role changed to keeping the two-year-olds from getting caught up in the whirlwind. It was 20 minutes before Ashley could get the five fighters calm enough to give her an explanation. Apparently two siblings live in one apartment complex and three siblings live in the adjacent one. A playground lies between. The previous week there had been another brawl, complete with punches and name-calling, over who owned the playground. A basic, low-level turf war. That’s what these kids learn from day one.

The scene of attempting to break up the fight stuck in my mind the rest of the day. It grieved me. But it was a stark and startling reminder to pray fervently.

-Another call to prayer-

On that note, God is teaching me so much about prayer. I won’t explain it all here, but I’ll tell you something cool God did for me. I had been feeling extremely guilty and convicted about my scanty prayer life. God kept shouting, “pray for this and pray for that.” He even proved to me the fruitfulness of prayer: 6 kids at National chose to follow Christ on the day to pray for National on the staff prayer calendar. But still I would not be faithful.

This week, I got pulled from my afternoon project of yard work to do building clean up for the rest of the summer. I was pretty bummed because I love chatting with the trees and sweating it out at yard work. What I didn’t realize was that the first half of building clean up is an hour of guided and intentional prayer.

So that is how God picked me up and sat me down and forced me to talk and plead with Him for an extra hour every day. I absolutely love it.

My favorite conversation of the week was with a 12-year-old boy on my walking route named Arath. He has never opened up much to me, but he did on Monday, the day before he moved to Georgia.

I don’t quite know how to describe it, so I’m going to copy straight from my journal what I wrote to God:

Ah Father,
Arath. Arath. Arath doesn’t understand your love. I suppose the same applies to me. But he says he tried to “stay a Christian” when all his friends started smoking and cussing and doing weed and stealing and mocking his church. He said he tried so hard but couldn’t do it. So he decided to stop following you. He wants to have fun. He says he has a better life without you telling him what to do and “getting mad at him” when he doesn’t do it. He says his dad’s church teaches that being a Christian means a list of things to do or not do. Arath neither understands human love. He said his friends love him because they would let him run away to their house. He is sick of his parents “making him be a Christian” so he is considering taking up the offer.

He cannot believe what I said that you do not give us a list but simply want us to say of you “I love you because you love me.” Please, please help his unbelief. He does not want you to make him like the towel that I rubbed in the dirt and then cleaned. Please, please draw him. He shirks at the idea of being like Gomer whom your servant Hosea took back. Please, please pursue him.

He said, “so if I were to become a Christian, just if, since you say it is not a list of things to do, what would I do to get closer to God?” I said he must find what makes him say of you, “I love you. I love you.” And I told him what causes me to say such of you. Please, please reveal your overwhelming love to him. He has no Christian friends and doesn’t want to feel alone. Please, please be his best friend. And if he does choose you, please, please bring him friends who follow you. Amen.

Arath didn’t leave me with any sure indication of which direction he would choose. He said he would keep thinking about what I said and asking other people what they thought. Though I doubt I will see him again, I will continue to plead on his behalf.