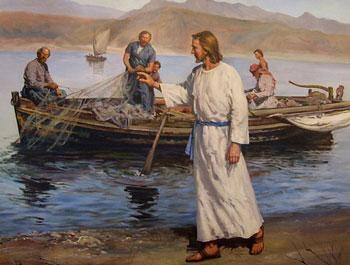 When Jesus walked on the earth, He called a few select people to follow Him as He ministered. There was something irresistible about His call, something that opened eyes to a new reality and caused a radical change.

Luke 9:23-25
“If anyone would come after Me, he must deny himself and take up his cross daily and follow Me. For whoever wants to save his life will lose it, but whoever loses his life for Me will save it. What good is it for a man to gain the whole world, and yet lose or forfeit his very self?”

Peter, James and John were partners in a small fishing business on the Sea of Galilee. This was their source of support for themselves as well as their families. Yet when they heard the call to become “fishers of men,” they eagerly responded; “So they pulled their boats up on shore, left everything and followed Him” (Luke 5:11).

Matthew (also called Levi) was a tax collector – a Jew appointed by the Roman government to collect taxes from his Jewish brothers. As a tax collector, Matthew made a good living, but he walked away from his life of security when Jesus called: “‘Follow Me,’ Jesus said to him, and Levi got up, left everything and followed Him” (Luke 5:27-28).

In the Old Testament, Abraham moved his entire household to follow God without even knowing where he was being sent (Genesis 12:1-5). Moses, at eighty years old, left the peaceful life of tending flocks to follow God’s call to confront Pharaoh (Exodus 3). And Elisha completely destroyed his old way of life when Elijah called: “He took his yoke of oxen and slaughtered them. He burned the plowing equipment to cook the meat and gave it to the people. Then he set out to follow Elijah” (1 Kings 19:21).

Answering the call to follow will always require a change, but the change may not be in physical location, profession, or status. The change may not always bring hardship. King Solomon followed God and was the richest man on earth. Joseph followed God and was the second most powerful man in Egypt. There is definitely a change involved with taking up our cross and following, but the real change occurs in the heart. It’s a change where we learn “the secret of being content…whether well fed or hungry, whether living in plenty or in want” (Philippians 4:12). It’s a change where we leave our old values and priorities, and find complete fulfillment in Christ.

As we draw closer to our Heavenly Father, we will find His call to be irresistible. We will learn the freedom and power of daily being led by His Spirit. And, as with many others who have gone before, we will NEVER regret answering the call to leave everything and follow.