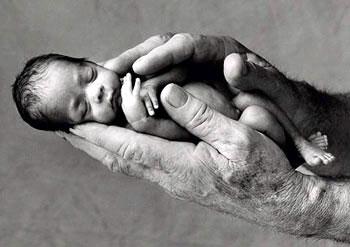 All through the Old Testament, God called the people of Israel to worship Him as the One True God. He spoke through Moses, the priests, and the prophets, but the people continued to turn away. Even after the Babylonians invaded Jerusalem, God continued to call His Children to return to Him – to return with ALL their heart!

They had done nothing to deserve His favor, but the Israelites were chosen to become a great nation, set apart and devoted to God. Without His grace, they would have been as lost as the newborn in the field – but God said “Live!” He picked them up, cleaned them off, loved them, and made them beautiful…but His Children forgot His love and abused His grace.

God loves us so much…and it breaks His heart to see how we abuse His gifts. Without the saving grace of Jesus, each of us is as helpless as the newborn baby. Without Christ, we have no hope of survival: “But God demonstrates His own love for us in this: While we were still sinners, Christ died for us” (Romans 5:8). We were lost in our sin until God reached down, picked us up, and said “Live!” Thank You Lord!!

Let’s remind ourselves of the miracle of Salvation! Though we have done nothing to deserve God’s grace, He reaches down and gives us eternal life, cleansing us of our sin and making us beautiful in His sight. We who believe have been born into God’s Family. Let’s not abuse His gift by forgetting when we were helpless, “naked and bare.” Let’s give Him ALL our love and always remember the days of our youth.